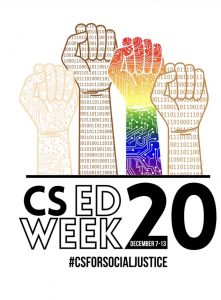 Computer Science Education Week (CSEdWeek) will be held from December 7 – 13, 2020. CSEdWeek is intended as a call to action to encourage K-12 students to learn CS, advocate for equity in CS education and celebrate contributions to the field. It is held in recognition of Admiral Grace Murray Hopper (December 9, 1906), who invented the first compiler and coined the term “bug” (an error in a program) after removing an actual moth from a computer in 1947. The first CSEdWeek was launched by ACM in 2009. This year CSTA is coordinating CSEdWeek for the first time.

Code.org first organized the Hour of Code (HOC) during CSEdWeek in 2013 to show that anybody can learn to code and to broaden participation in Computer Science. It started as a one-hour coding activity but has expanded to a worldwide effort to celebrate computer science and includes a variety of community efforts.

Consider organizing an HOC event during CSEdWeek to teach how to use CS as a tool for social justice, inspire students to study CS, advocate for CS Education, involve administrators and celebrate CS education. The resources below are provided by CSTA, Code.org and their partners and are found mainly on CSTA’s CSEdWeek site and Code.org’s HOC pages. There are also links to resources prepared and used by our colleagues to organize an HOC at their schools.

Please email info@cs4nj.org to have other CSEdWeek resources included on this page.